This page recounts the history of our involvement with the work in Rwanda, in a chronological order. To see the latest news, please scroll to the bottom of the page and click on the appropriate update reports.

At the Nursery School- Rwanda 2016

New Dawn has been working in collaboration with Pastor Paul Netayomba and his wife Annett, since 2011.

Pastor Paul’s community is largely populated by a number of needy young and single mothers and heads of households, many of whom have been victims of genocide and sexual abuse. Due to their current financial situation of extreme poverty, most of these women are very vulnerable to further sexual exploitation. Although Butare is home to several important academic institutions, a large portion of the local population lives under extreme poverty. Many young children roam the streets as they lack the funds to be able to attend school.

Jennie and Don, with Paul, Annett and their family

At the beginning of 2012, New Dawn Association was able to initiate a weekly feeding and necessities program for the poorest and most needy people in Pastor Paul’s community. A nutritious meal, including meat, was served once a week in the church building. This program has had a life-changing impact upon the community, drawing them together, to not only eat, but also to share fellowship. (Not only is food prepared and shared but food-bags are filled to be taken home to assist the neediest families.) Out of the monies donated certain school necessities were also able to be purchased, for needy school children, and soaps, and other basic commodities, for disadvantaged families. These modest actions have already brought big changes to the lives of needy children and adults in this community. Pastor Paul writes- “Thanks for the support that continues to make these tremendous and fabulous changes to the lives of our extremely needy women, children and old men.” He also wrote, “Elderly people who were ashamed to come to church have now received new clothing; children unable to attend school because they lacked certain things are now receiving pens, exercise books, and certain school clothes. This is such a beautiful action going on in our community because so many people can lose hope…” 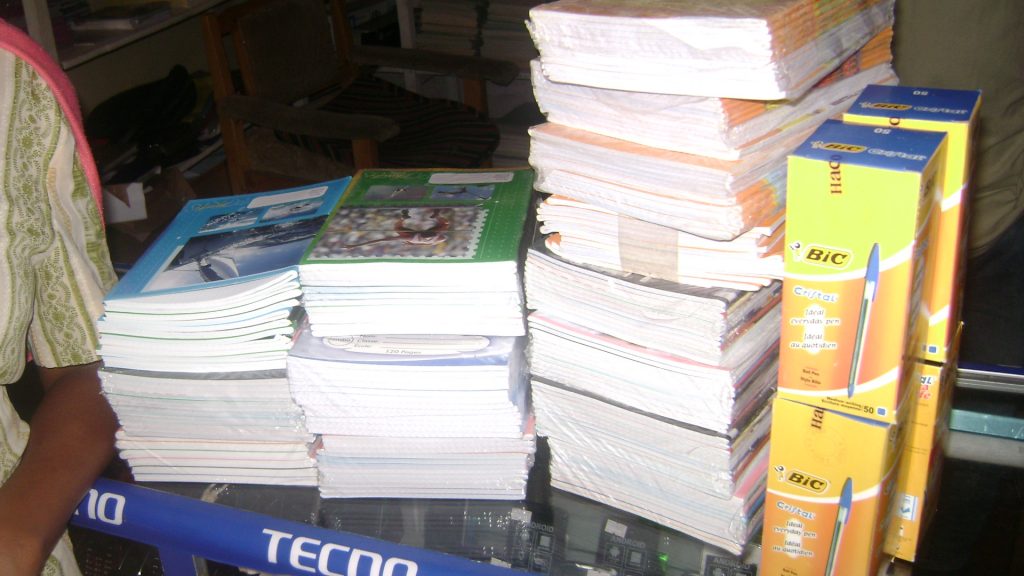 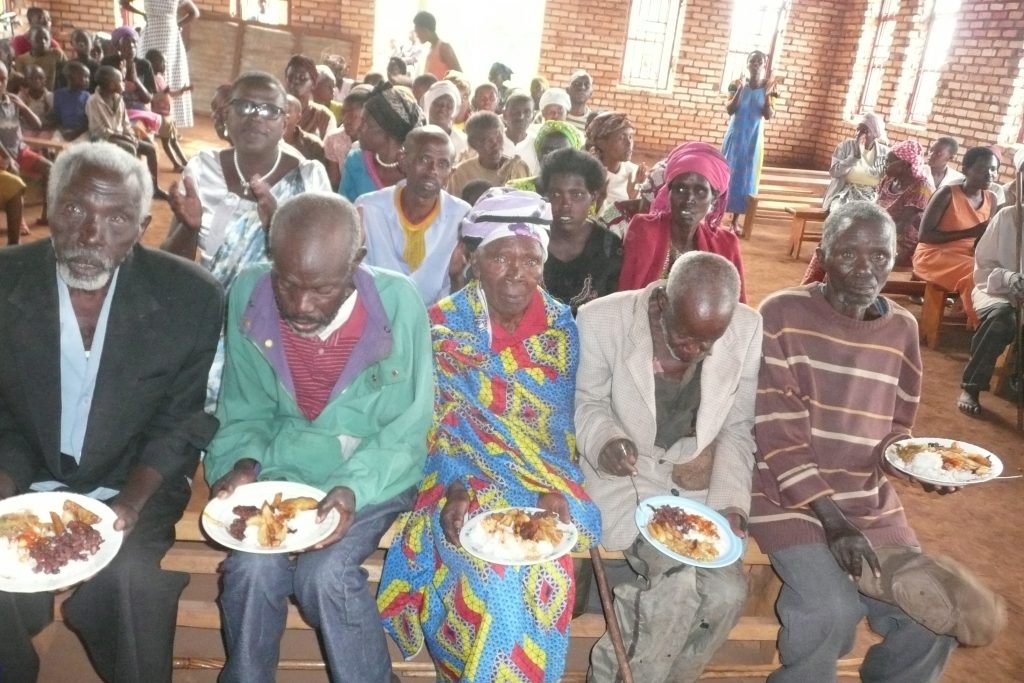 Over the years, within this same program, other needs, large and small, have been met in this impoverished community. We were moved by the plight of a lady called Alphonsine who lives in a very basic dwelling with her six young children. Alphonsine and her children all slept on the bare dirt floor. New Dawn provided this family with new beds, mattresses, and bed linen. (Alphonsine’s wayward husband is reputed to be a drunkard, and a drug addict. However, we have since learnt that because of this unprecedented kindness shown to his family, there are positive signs that he is trying to reform.) Mme Mitterrand, a sick widow living outside Butare, has now received 20 new iron sheets with nails, enabling the roof of her house to be completely repaired. Many families have received new mattresses, clothing and new bed-sheets.

…Stemming from this initial weekly feeding program, at the beginning of 2017, a group of 11 desperately needy families were selected, to receive monthly visits and financial aid. It has been called ‘The New Hope Group’.  Some of the stories concerning members of this group are tragic. Helen is very poor, and like many of the others, she is a victim of HIV/AIDS. She is required to take strong medication, and lacks nutritious food. Often, she is so weak that she faints. She takes care of her young granddaughter who has been abandoned by her mother. Helen hopes and prays that God might extend her life for another year. (Her grand-child has been selected to attend  the New Hope Nursery School.) Jeanne is totally impoverished, living on her own, (her husband having abandoned her.) She is struggling to raise her 5 children. Her house remains unfinished, and she and her family sleep on the floor, lacking beds and bedding sheets.

Zidori lives on his own and is desperately lonely. All his 11 children were killed in the 1994 genocide, that took place in Rwanda.

Following our visit to Rwanda in 2015, with the desire to continue to encourage Paul, Annet and their team, in their tireless work in their community, we asked Pastor Paul to share with us his areas of greatest need, and how New Dawn Association could further help his community. He suggested that the setting up of Nursery School (kindergarten) would meet the most pressing need, offering many side benefits to the poorest families. With the agreement of our board, this project was launched, with the aim to have the “NEW HOPE NURSERY SCHOOL” up and running in January 2016. Funds were allocated for the setting up of the project, and the running costs for the first year. Paul’s spacious church of would serve as the classroom for 20 young children, (with wooden screens to enclose the classroom/working area.) A water tap was installed by the church door; the existing latrine block was completely renovated, and all the supplies and materials needed were purchased.

2015- Working on the renovation of the latrine block

2015- Bringing the water supply to the church door to
create a tap.

In January 2016,the initial three-year project, started, for 20 children, selected from very poor backgrounds, who otherwise would almost certainly not be able to go to school. Many of these small children suffer from a high-protein deficiency, due to a very poor diet, so a daily provision of sugared, milk-porridge and bread has also been built into the school budget. A teacher had been found, in the community, (to be shortly afterwards joined by an assistant,) and, by the end of January 2016, this project was in full swing, to the delight of the local community. (2 of the children who attended this first year had been selected from a neighbouring poor community, and they walked, with their mothers, 3 hours each morning, and 3 hours in the afternoon, to get to school and back home.)

2016 end of term performance at the Nursery School

The first months of the initial year were quite challenging for Kanyana, the school teacher, as all the children had to be taught even the most basic rules of hygiene and discipline. The contrast from playing free, all day long, out on the streets near their homes, to staying 5 hours, in a disciplined program, was enormous for them. However, after a few months, already great progress was made. (Many of the children do not get any breakfast before arriving at school, so the sugar-milk porridge and bun becomes a nutritious treat.) By the end of 2016, 10 of these children had made so much progress that they were ready to enter the Primary School level. In January 2017, the second year Nursery Program commenced, and 10 new children were selected to replace those who had gone on to Primary Schools. We are please to say that this second year will be successfully completing at the end of 2017, and, funds permitting, the third year will commence in 2018.

Visiting the children in December 2016

At the Nursery School- November 2017

A small ”School Fund” was successfully initiated at the end of 2012, and with this school necessities were bought to give out to needy children. However, on our visit to Rwanda in 2015, we met another family whose son, Andrew, had been sent home from High School because they could not pay his school fees and his mother told us that he was about to leave home to become a “street-boy”. With a donation given to us just before we left France, we were able to pay the 2015 High School fees for this boy, enabling him to return to school. We have since, received his school reports every term, and after a short catching- up period, he successfully completed his exams at the end of the year.

Andrew, the first child to enter the Education Program. 2015

Since the beginning of 2016, New Dawn has been able to expand this education program to include 22 children. Currently, (November 2017), there are 13 students in Secondary School, and 9 students in Primary School. New Dawn receives regular notification of the progress of each child in this program. At the end of 2016, another visit was made to the project, and we were able to meet and spend a day with all these students. Needless to say, their gratitude is enormous.

With the students in the Education Program- December 2016

During our 2015 trip to Rwanda, to follow-up the on-going work on the ground, unforeseen circumstances led us to visit the local hospital with Pastor Paul. He needed to see one of the members of his community who had just had an accident. (He had fallen out of the avocado tree in his garden, seriously damaging his shoulder and sternum.)

We were quite shocked at the appalling situation we discovered when we were taken to the “entrance ward”, to visit this man. This was a long room lined on either side with rows of beds, each filled with ailing people. On the floor, around some of the beds, were piles of soiled plates and pots; (those who were fortunate to have family or friends were fed with food brought into the hospital by them- apparently, the others had nothing except water.) The ward was filthy, with bloodied bandages and cotton wool strewn in various places, and an atmosphere of silent hopelessness and despair hung in the air. We found Paul’s friend, in great pain, in bed near a corner. Paul explained to us that if people did not have the national medical card, (which needed to be bought each year, for each member of their family,) they were barred from having free access to basic medical care. Most of these cases ended up in wards like this one, which we realised was, for many people, ‘a departure lounge’, as, unless they found the resources to pay to see a doctor, only the most minimal of aid was offered to them. Pastor Paul explained to us that most of the very impoverished people in his community are not able to pay for these cards, and, tragically, many die unnecessary deaths simply because they could not get to see a doctor. (They do not even bother to try to come to the hospital, choosing to stay at home, and, in many cases die.) As we talked with Paul’s friend, two people came in with a wooden stretcher to collect the body of someone in a bed at the far end of the room, who apparently had died. Every one watched silently as his emaciated body was lifted onto the stretcher and taken out to the front of the hospital. 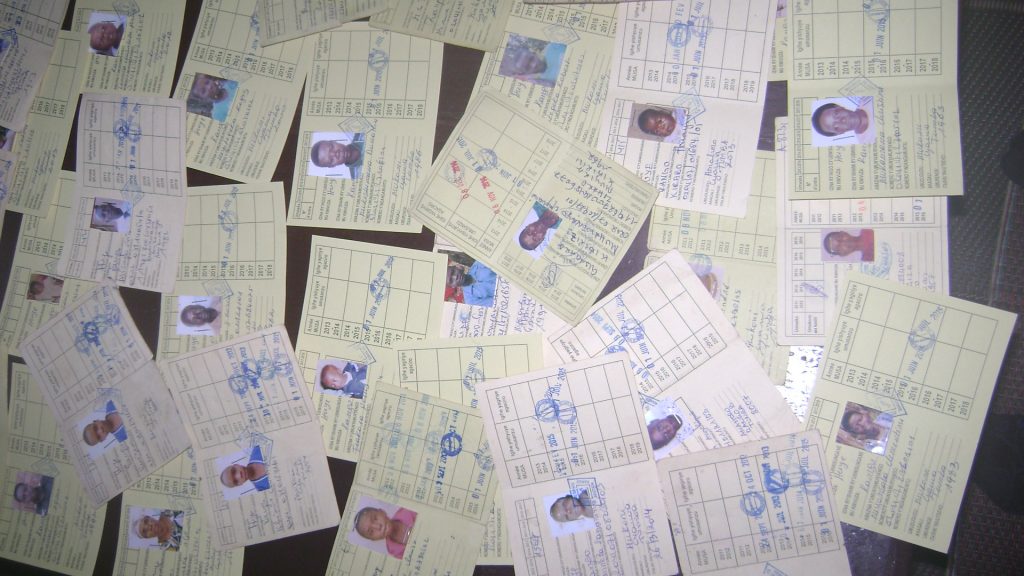 It was following this shocking, eye-opening experience that we discussed with Pastor Paul the possibility of setting up a program to assist the most impoverished people within his community to obtain medical cards. This program has now been successfully running since 2015, and in 2017, it was possible to supply 70 Medical cards for selected members of Pastor Paul’s community.

We learnt that the young man Pastor Paul was visiting had no medical card, and very little resources. It was impossible for us to turn our backs and leave him there.(During our stay, we arranged for him to receive proper treatment and also to get a medical card.) 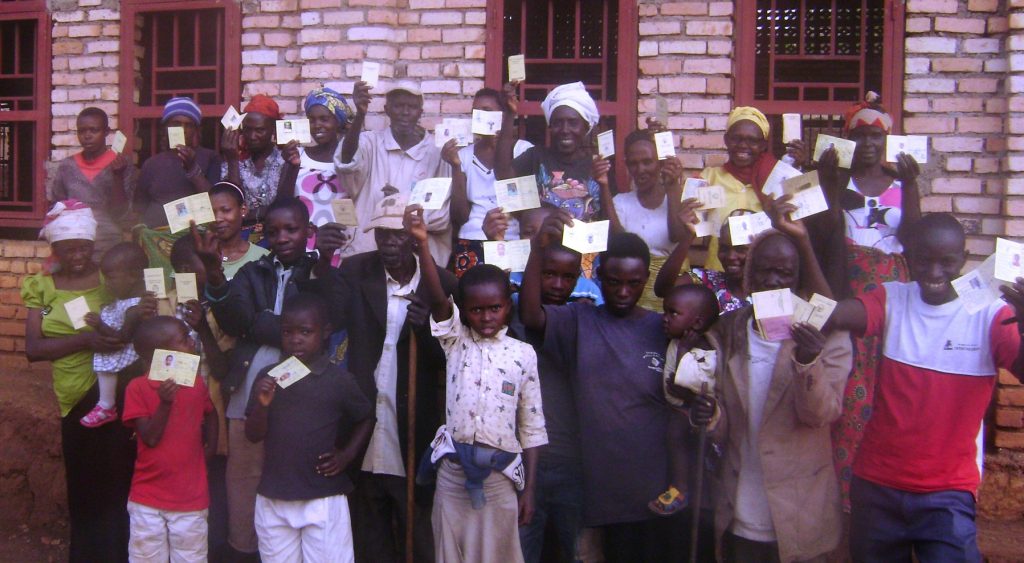 June 2018 - With the 20 Nursery School children- Trying on a gift of a hand-crafted clothes over their school uniforms!